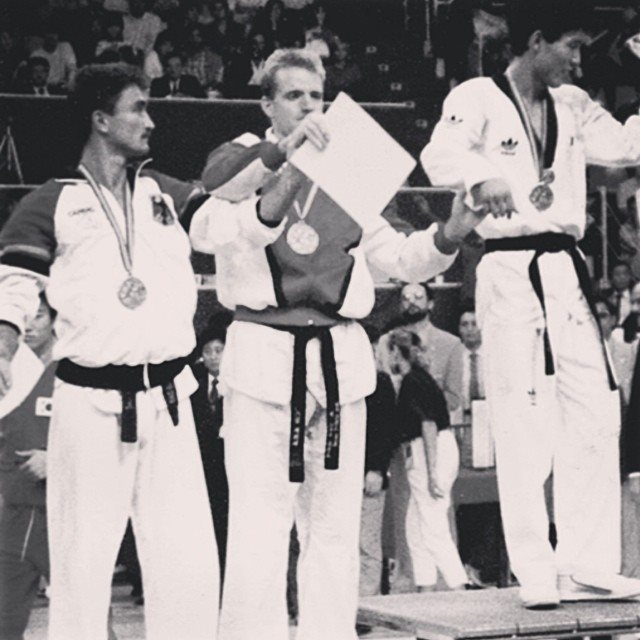 How Korea Created and then Destroyed the Martial Sport of Taekwondo

Shortly after liberation from Japanese colonial rule in 1945, Koreans who had studied karate in Japan returned to Korea and opened martial art gymnasiums mostly in Seoul teaching the Japanese and Okinawan martial arts they had learned. As time went by, Koreans involved in these martial arts began to feel the need to “Koreanize” what they were teaching. This led to a change in the various names of what they were teaching (tangsoodo, gongsudo, gwonbeop, etc.). Eventually, the name taekwondo was decided upon and came to be used by the Korea Taekwondo Association (1965). It was around this time that the sport nature of taekwondo began to rapidly develop due to the advent of school teams and a large number of competitions. The sport rapidly evolved and with this development the myth of taekwondo’s Korean origins also came into being.

The dynamic and unique (mostly) kicking sport of taekwondo experienced rapid growth worldwide and eventually was recognized as an Olympic sport starting with demonstration status in 1988. However, from its inception as a sport, taekwondo was plagued by corruption and malfeasance that are prevalent in South Korean sport (and politics). This corruption often took the form of match fixing and was on full display for the world to see in the 2000 Sydney Olymptics.

This led the govering body (World Taekwondo) to develop and implement the use of an electronic body protector that scores most of the points in a match. The result of this development has been the rapid, almost total degradation of the unique technical character of taekwondo and the dilution of its nature as a full-contact martial sport.

Taekwondo coaches, athletes, and administrators are no longer in control of what is recognized as a legitimate taekwondo technique. This is determined wholly by the parameters of the electronic body protector which is the main scoring mechanism. Anything that satisfies the system’s parameters is scored. This has destroyed the intricate, highly developed and well-balanced technical system that took fifty years to evolve. The reason for this is simple and clear: Koreans were not able to fairly manage, administer, and officiate the sport that they had created.

Steven D. Capener is an associate professor of literature and literary translation at Seoul Women’s University. He has a Ph.D. from Seoul National University in sport philosophy and another Ph.D. from Yonsei University in Korean literature. He first came to Korea in 1986 for taekwondo competition as a member of a U.S.team. He represented the United States in the 1986 World University Championships and the 1987 World Taekwondo Championships winning bronze medals in both. He also won the gold medal in the 10th Pan-American Games where taekwondo was making its debut. He worked for the World Taekwondo Federation for three years from 1989 to 1992. He has resided in Korea for thirty years.